When searching different family trees on Ancestry.com, we came across this entry below which suggests that Walburga Stangl was from a royal family. She is shown as “von Stangel” in this tree and in others on Ancestry. The use of “von” before a family name signaled royalty at one time.  Could it be that Paul Kraemer married into royalty?

Information in Ancestry can look very official as in the example above, but it can be wrong. Walburga was NOT from a royal family. Her name was not “Von Stangel.” It was “Stangl.”

In Tiefenbach, the closest thing to royalty was the Reisach family. They were the local lords in the area from about the 1600s to the 1850s, but it is believed that they were not royalty – that is descended from a royal family. They were referred to as Reisach rather than “von Reisach” and signed their names that way as shown by the Anton Reisach signature below.

The Reisach’s had the status of a local lord. At one time, they were the the major landowners and administrative center for civil affairs with their own court to review matters such as marriage, property ownership, inheritance agreements and so forth. They also could adjudicate local disputes.  However, their land holdings declined over the years having been sold off to peasants – possibly to support their lifestyle. After 1848, that State took over business matters previously handled by the local lord’s courts so their administrative role over the Tiefenbach area ended.

We have already indicated that Paul Kraemer and Walburga were from the peasant or lowest social class in Germany (see earlier story “Who were the Kraemers?”). So why does she have the “von,” in front of her family name? Besides signaling royalty, “von” in German means also means “of” or “from.”  “Von” could refer to the family to which a person belonged or to the place where they came from. Thus  Walburga Stangl was “of” [von] the family Stangl and “from”[von] the town of Heinrichskirchen  – about 5 miles from Tiefenbach. The exerpt below from their marriage consent shows that von was commonly used to indicate the geography a person came from: 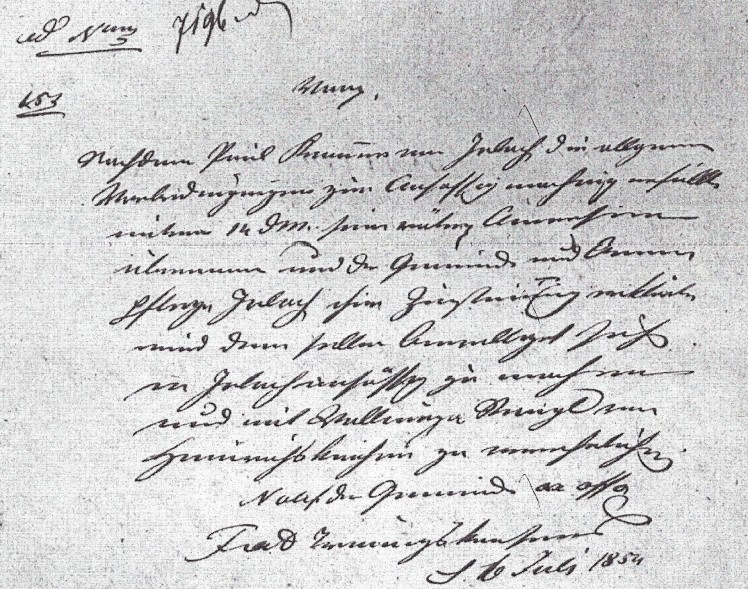 Paul Kraemer, quarter farmer from Irlach is officially receiving this confirmation letter that there are no obstacles found by the police, regarding his marriage to Walburga Stangl from Heinrichskirchen.

So where does the “von” come from in Walburga’s name. The answer is that it comes from church or civil records, and from the misinterpretation of such records. For example, possibly some record said “Walburga von Stangl,” which meant Walburga from the Stangl family rather than Walburga from a royal family. Or the record might have said Walburga Stangl von [Heinrichkirchen] and the translator saw only “Walburega Stangl von” and misread the original. Although Walburga’s family was more well off than Paul’s family, she clearly did not come from royalty. She was of the same peasant class as Paul Kraemer. Walburga’s father, Thomas Stangl, was a “master weaver” and a ½ farmer. As a master weaver, Thomas could train apprentices who would normally live with the family during their two-year apprenticeship.

An interesting question is “Could Paul Kraemer been such an apprentice with Thomas Stangl?” We do not know, and probably can never know, but it is an intriguing prospect.  There are two later examples which illustrate how it could happen. While he was building houses and barns for farmers, Edward Kraemer of Plain lived with the farmers for whom he built. While building a barn for John Frank, Gisela Frank was also living there helping her brother. This prolonged proximity enabled them to get to know one another and developed into courtship and marriage. Leo Kraemer and Lucy Bauer became close while working for Ted and Ester (Leo’s sister) Frank and later married. So, it is possible that Paul Kraemer did an apprenticeship with Thomas Stangl, lived with the Stangls and developed a relationship with Walburga.