In the December 2015 issue of the OFTHS Newsletter, a description of the book Kraemer in Amerika mentioned the Minnesota Kraemers were “distantly related” to the Wisconsin Kraemers. This account will show that these two branches of Kraemer families are related more closely than many people may realize.

“Kraemer in Amerika”
This book is about Kraemers in Tiefenbach, Bavaria, Germany, that immigrated to Minnesota and California; they are distantly related to Wisconsin Kraemers.
Color list price: $75.00 (330 pages)
Black and white list price: $45.00” 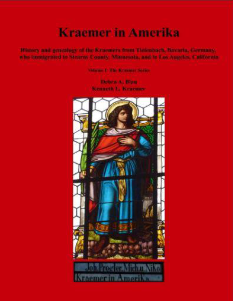 The two families (Minnesota and Wisconsin Kraemers) stem from the same father, but different mothers. The common father was Johan Sebastian Kraemer who was born in Tiefenbach, Bavaria in 1701 and died about 1760. Like the Kraemers before and after him, he was a weaver.

Johan Sebastian and his first wife, Barbara [surname unknown] were married in Tiefenbach but lived in one of the suburbs – the small village of Altenschneeberg located at the top of the Schneeberg mountain overlooking Tiefenbach. Barbara was the mother of the Wisconsin Kraemers line. There is a pew in St. Vitus Church today that bears the nameplate “Barbara Krämer.” The descendants of Paul Kraemer of Plain, Wisconsin are from this branch (shown in blue in the family tree below). Johan and Barbara had at least three children. She died in 1758.

The second wife of Johan Sebastian was Margaretha Schmid; they were married in 1759. She was a 40-year-old widow (wife of Mr. Fischer) who owned a house further down the mountain in the village of Haag. Sebastian moved in to her house after their marriage. This move enabled his eldest son, Johan Michael Kraemer, to take over the family property in Altenschneeberg and to start his own family. In 1790, Michael moved his family to house number 27 in Irlach – the house where Paul Kraemer would be born in 1828.

Johan Sebastian and Margaretha Schmid had one son, Anton Leopold. Although Anton lived only 31 years, his progenies are shown in green in the family tree below. It was Michael and George who immigrated to America 1852 and eventually ended up in Stearns County, Minnesota. Younger brother Nikolaus immigrated to St. Cloud, Minnesota ten years later in 1862, and in 1891 he moved to Los Angeles, California. 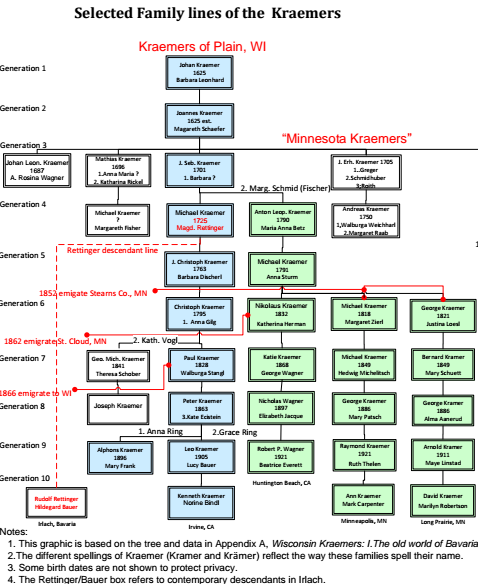 In Bavaria, Paul Kraemer and his cousins Michael, Georg and Nikolaus were not distant from one another. They lived in Tiefenbach or one of the towns nearby within 2-3 kilometers – an easy walking distance. As weavers and small farmers, they were all at the same economic level. They were close socially. Life revolved around the church, and all of the Kraemers belonged to the same Catholic Parish and attended St. Vitus Church in Tiefenbach. They attended one another’s weddings, were baptism sponsors for each other’s children, and served as wedding witnesses. They also attended funerals of relatives and friends, and especially those of children whose death rate was around fifty percent in those times.

Their relationships were very much like the Kraemer families in Plain. Some were closer than others, but they all knew one another. And as in Plain, as the generations passed, they probably lost track of relatives but much more quickly than we do today.

The first two brothers of the Minnesota Kraemers, Michael and Georg, immigrated in 1852. Their younger brother Nikolaus immigrated in 1862. Paul and his wife Walburga did not immigrate until 1866. Given that Paul (born in 1828) and Nikolaus (born in 1832) were close in age, it is likely that Paul Kraemer heard some news from Nikolaus about Michael and Georg’s experience in the ten years they lived in Minnesota. The relationship between Paul and the three brothers was “second cousin once removed.” Being a second cousin is not a distant relative at all. Think of the large Paul Kraemer family in Plain and their seven married children and all their generations of descendants which now extend to at least fourth cousins. They may not all know each other, but they are related.

We have no indication that once in America, Paul and the three Minnesota brothers ever met or even knew of one another’s location. Transportation and communication in America was primitive outside the major cities. In the Northwest Territory, which included Iowa, Minnesota, and Wisconsin, pioneers mainly followed the dusty trails of Native Americans.

Over time, as the Tiefenbach cousins began to eke out their livelihoods in their new surroundings and raise families, they lost their connection with each other. Telephones were non-existant in the early villages and didn’t become common in homes until the late 1920s or later. By then, the Tiefenbach cousins that emigrated to America had long since passed away.

As in most families, children often moved off the farm and into other cities and states. Some of the Wisconsin descendants of Paul Kraemer (children, grandchildren and great-grandchildren of Sylvester Kraemer, for example), moved to Minnesota, unaware of their Minnesota Kraemer cousins.

As the years went on and searching for one’s roots became popular, the Minnesota and Wisconsin Kraemers came into contact again. It was a memoriable day in September 2014 when “sixth cousins!” (a great-great-granddaughter of Nikolaus Kraemer and a great-great- grandson of Paul Kraemer) climbed the bell tower of St. Vitus Catholic Church in Tiefenbach at high noon to search for the bell donated by Katharina Hermann Kraemer in 1911. Unfortunately, the bell was not found, and it is believed it was melted down to make bullets for German soldiers in World War I or II.

We hope this report answers the question, “Are the Kraemers of Wisconsin and Minnesota related?” and that you are curious to learn more. Our answer, with suretly, is “Yes, the families are related!” They all have the same ancestor in common. People may think of Paul Kraemer as the head of the Kraemers in Wisconsin and don’t look beyond to his roots. Yes, he paved his way to America with his wife Walburga and three children to begin anew. But Paul has his roots in Bavaria – in Irlach and Tiefenbach – where his parents, grandparents and great-grandparents, aunts, uncles and cousins all lived.

The Kraemer in Amerika book explains in great detail about the beginnings of all these Kraemer families in Tiefenbach, Germany, and the three Kraemer brothers that emigrated to Minnesota and also Nikolaus Kraemer’s life in California. This is a “must have” book for anyone with ties to any Kraemer that originated from the Tiefenbach area – both the Wisconsin and Minnesota families.